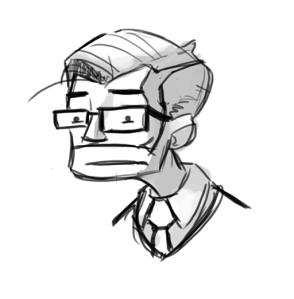 Who is Decker Fantastic?

I am the Art Director/Lead for Those guys!

What does Decker Fantastic do??

Mostly I stress out about the deliverables. But my job means that I am responsible for the entire look and feel of the game, so it kinda makes sense. I lead a team of 3 other artists, as we piece together Chained. This means I do a lot of fun drawings in my sketchbook, have a lot of meetings with the Game Designers, and enable my team to create the world we will all get to play in.

WHAT IS GOING ON WITH THE GAME?!?!

Well we just passed off our Alpha build, and that taught us a lot about how much game we have, and where we want to go with it. It was the first time we were ever able to play from A to Z. In doing so we uncovered a lot of little holes to fill, and a few major bumps to smooth over.

so now we are full scale production of our Beta release. This is a lot of fun because we have everyone working very hard and it is very inspiring how much work can get done if you have a group of very motivated people working on it.

Individually, we have all been working in our specified areas, Hojun and Adam have been started their texture painting to polish up our current art assets. Anne has been kicking serious ass with her animations, and continues to work with Jonathan about implementation. Hojun has also been quite vigilant in his security duties. The programmers write their magic poems with numbers and we are always impressed with their Alligator Factories. The game Designers, have basically rebuilt our game from scratch and it is looking so good.

Anyway, We are all hard at work and some exciting things are coming from it. We are proud of what we have accomplished and excited for what is coming next.

Hello everyone! I’m David Fenton the gameplay programmer for Those Guys.

My role on Those Guys:

I am the gameplay programmer.  I specifically work on the player controller.  This entails working with the designers, mainly Jonathan, to get the game mechanics working properly.

Update about my work:

Update about the game:

Art side: Adam and Hojun have been working very diligently to finish blocking out all the models in the game.  Some are completely finished and textured and they have planned to finish texturing the rest soon.  Anne ran into some major issues with her rigging and skinning on That Guy.  She and Jonathan worked very hard to solve the problem and learned there was something missing during the exporting phase of the animations.  Since that was solved, Anne’s animations were put into the game and they look fantastic.  Speaking of fantastic, Decker modeled a moth and bat which Anne animated.  He also drew some concept art and did a lighting pass on the game levels for alpha.

Design side: David, Jonathan, and Brandon finished a blocking pass on their levels.  The levels are currently undergoing an evaluation phase on what works, what doesn’t work, and what serves best for the narrative and mechanics of the game.  Jonathan added in the moths and bats to one of the levels to show their implementation for later use.

Tech side: Hans finished and is tweaking his path finding system for the moths and bats.  It works well and is easy to use for the designers.  Adrian’s fog looks astounding in game and he is currently working on adding frustums to the list of available shapes.

Now, on a completely off topic and random note:

If everyone stopped working on what they were doing and we, as humans, put everything we had into making a time machine that could go back in time, everything would become irrelevant.